Pickup and delivery
for cats and dogs.
We can pickup your dog for dog training and/or boarding and then return the dog to anywhere in the world. 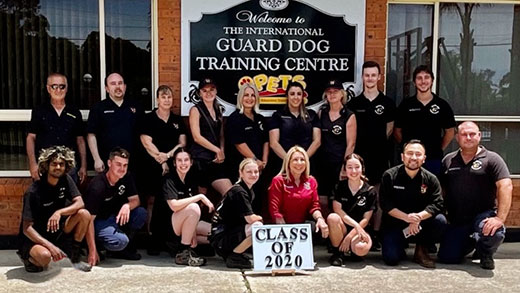 Located on the outskirts of Sydney, Australia, the Guard Dog Training Centre has an international reputation for excellence in training dogs.

The owners, the Osmani Family, have been involved with training dogs all their lives.

Their reputation has taken them to places such as Germany, Belgium and France, where they were involved with training Schutzen 3, FBI and IPO dogs.

Fred and Luana Osmani are the founders of the Guard Dog Training Centre. Our business is a family business, established for 30 years. The majority of our business is based on recommendation.

We have provided our services in the past to professionals including professors, doctors, veterinarians, sporting people, businessmen including Mr Kerry Packer and major companies like: Akubra Hats, Corinthian Doors etc.

Fred Osmani & his 2 Rottweilers have taken part in the film directed by the famous producer Mr Feroz Khan, Fire of Love. (Bollywood Movie)

Guard Dog Training Centre  dogs have been supplied all over the world.

Finalist in the 2007 Ethnic Business Awards

The Gala Dinner and Awards Ceremony honouring the finalists and winners was held in Sydney, Australia at the Hilton Hotel on November 14, 2007 presided by the Australian Governor-general, Michael Jeffery

For almost two decades, the Ethnic Business Awards have stood as a triumph for diversity and a celebration of success. As Australia's longest running business awards, they honour the contribution of migrants to the social and economic evolution of the country and champion cultural diversity, ingenuity and success within Australia's national business community.

Vet on site daily as required

Would you like to adopt or surrender a pet?
Animal Adoption Agency in Sydney